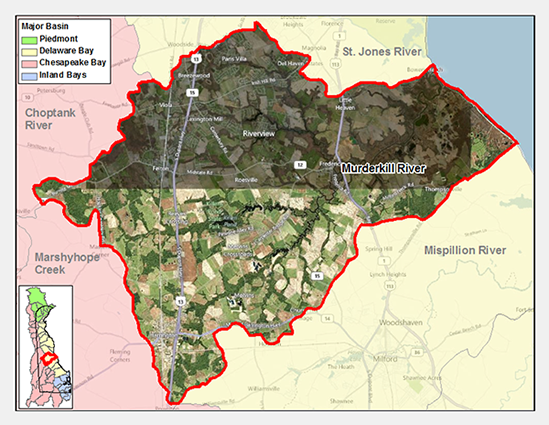 Background
The Murderkill River watershed is located in the southeastern portion of Kent County. It is bounded on the south by the Mispillion watershed, on the east by the Delaware Bay, and on the north and west by the St. Jones River and Marshyhope Creek watersheds respectively. It is comprised of 68,000 acres of land. The main watercourse is the Murderkill River with its headwaters just west of Felton. Flowing generally eastward, the length from the headwaters to its mouth on Delaware Bay at Bowers Beach is 20.5 miles. The lower 10.5 miles are tidal. Two important ponds, Coursey Pond and Killens Pond, are both on the Murderkill.

Land Uses
The Murderkill Watershed is dominated by agriculture land use followed by forest and wetlands.

Water Quality
Please go to the Land/Ocean Biogeochemical Observatory (LOBO) site to see the latest real-time water conditions at the mouth of the Murderkill! This station represents the state-of-the-art in water condition and quality monitoring.

Contaminants
The Murderkill River Watershed has five sites listed in the Site Investigation and Restoration Section database. Four sites are state-fund lead (HSCA) sites, and one site is in the Voluntary Cleanup Program (VCP) .

If you would like to view reports for any of the sites in the SIRS program please follow the link the DNREC Environmental Navigator to search by map for the Murderkill River Watershed.

Geology and Soils
Land in this watershed may be classified as dominantly level to gently sloping. The Murderkill River Watershed has predominately well-drained soils. Tidal marsh soils occupy 6% of the landscape and are found in the flood plains below the dams of Andrews Lake, McGinnis Pond, Courseys Pond, and McColley Pond and along the Delaware Bay. Broadkill, Missipilion, Westbrook, Honga, Bestpitch and Transquaking are the tidal brackish soils found in the flood plains of the watershed. Poorly drained soils, predominantly Longmarsh and Indiantown, along with some occurrences of Chicone and Zekiah, can be found above the dams in the non-tidal flood plains. The well-drained upland soils are predominately Downer and Ingleside with small areas of moderately well-drained Hammonton soils in slight depressions. A few Sassafras soils occur on level landscapes. In the headwater areas of the Murderkill River, poorly drained
Hurlock and Mullica soils are found. Some well to excessively well-drained sandy soils (Galestown and Evesboro soils) are found near the ponds. In shallow depressions throughout the watershed, Hammonton and Hurlock soils are encountered.

Recreational Opportunities
Killens Pond State Park is found in the Murderkill Watershed. Natural and recreational opportunities abound at Killens Pond State Park with a 66 acre millpond which features fishing and boating. Canoes, kayaks, rowboats and pedal boats can be rented during the summer. The Murderkill Canoe Trail provides a challenge for the most adventurous paddler. The all new Killens Pond Water Park offers resort entertainment in a serene, natural setting. Open year-round the park's campground and cabins are popular retreats no matter what the season. Hiking trails and a cross country course wind through several types of habitat. A number of game courts, ball fields, disc golf, playgrounds, and picnic areas are also found in the park.

Flora and Forest Communities
The rare species of naturally occuring bald cypress trees is found in only four watersheds in the state, one of which is the Murderkill. Also, significant remaining populations of Atlantic White Cedar are also found in the Murderkill. 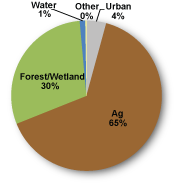