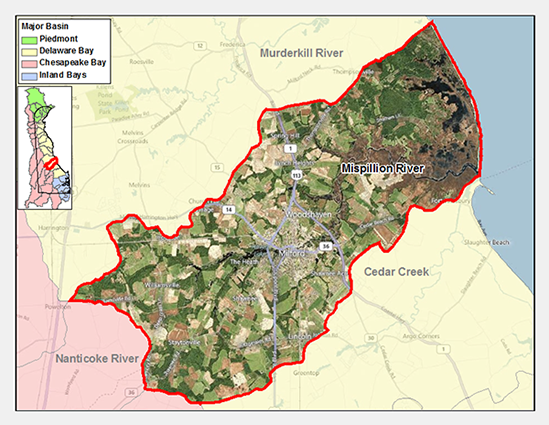 Background
The Mispillion River is located in southeastern Kent County and northeastern Sussex County. It forms the dividing line between Kent and Sussex counties. The Mispillion River flows in a generally easterly direction and forms for its entire length the Kent - Sussex County line, approximately 20 miles in length. There are nearly 70 miles of waterways plus several lakes and ponds in the watershed. There are four major water bodies in this watershed: Blairs Pond, Griffiths Lake, Haven Lake and Silver Lake. The watershed drains approximately 76 square miles. The headwaters of the Mispillion River origniate several miles inland and the river flows to the east where it drains into Delaware Bay.

Land Uses
The two major urban areas are Milford and Houston. Major land use in the area consists of agricultural lands and wetlands.

Water Quality
Please go to the Land/Ocean Biogeochemical Observatory (LOBO) site to see the latest real-time water conditions at the mouth of the Murderkill! This station represents the state-of-the-art in water condition and quality monitoring.

If you would like to view reports for any of the sites in the SIRS program please follow the link the DNREC Environmental Navigator to search by map for the Mispillion River Watershed.

Geology and Soils
Tidal influences affect the lower Mispillion up to the eastern edge of the City of Milford. Land in this watershed may be generalized as level to sloping with soils being characterized as having few drainage limitations and being of high agricultural productivity.

Cultural Resources
The Misipillion Lighthouse is a point located at the mouth of the river. It contains several wharfs used chiefly by fishing party boats and local oystermen. 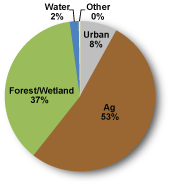